Today the Fielding boys and girls football teams played their 3rd game of this years Peal Shield and RSK Girls Cup campaigns against St. Mark's. Although the game was due to be our first away game of the year, St. Mark's asked to play on our field so we had home comforts to look forward to again.

The girls game kicked off first at 2pm with the boys due to follow at 2.45pm. St. Mark's girls were coming into the game with 2 wins from 2 against good teams this year so we fully expected this to be a tough game and were ready for a battle. Fortunately we had a very quick start took control of the game early on with a first goal from Izzy. The girls did not let up and continued to push on to try to extend their lead and the constant pressure led to a string of corners for Fielding. Izzy and Lily were rotating corner taking duties and both were delivering excellent crosses which were being turned into the back of the net. When we had the ball today, we were calm and picking out decisive passes. When we didn't have the ball, we were pressing with great speed and winning the ball back very quickly. Everybody played superb today and in the end the girls finished with another astonishing win of 11-0, with 3 goals from Izzy, 2 each from Serafina, Lily and Chloe and 1 each from Daisy and Oona. That result keeps the girls top of their group and guarantees a place in the quarter finals with 1 group game still to play. Well done!! 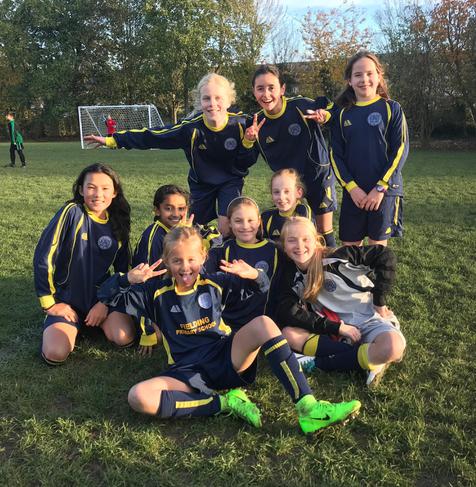 The boys kicked off soon after the girls finished and were hoping to get their third win of the campaign too against a St. Mark's who had previously won 1 and lost 1. The boys also managed to start quickly with a goal from Mateo early on to settle any nerves we may have had. After the early goal Fielding had a fair amount of possession but couldn't make it count. The game got to half time with the score still at 1-0 and Fielding still just about looking like the better team. St. Mark's had a lot to play for still though and gave us a tough second half. About half way through the second half and St. Mark's found a way through and scored a goal to level things up. With just under 10 minutes left in the game we started pushing on to try to get all 3 points but we couldn't find the end product. As the final whistle blew we ended the game with a 1-1 draw against a good St. Mark's team to make sure that we stayed top of the boys group too.

Well done both teams for putting in great performances once again.