The boys travelled to St. Raphael's school in Northolt today for their third game in this years competition. After a long journey on 2 buses to get there, the boys game kicked off first. The first half of the game was a very scrappy affair with neither team not really creating much, although Joe G in goal for Fielding was forced to make a couple of fine saves. Both teams needed a win today and this showed in the second half as both tried harder to get ahead in the game. Midway through the half Zach P broke down the left and sent in great cross which was knocked on by Mateo to Rory who headed home. 1-0 to Fielding with just over 10 minutes to play. St. Raphael's started to push for an equaliser which forced Joe C and Emile to get more involved at the back as they started to make some important blocks and tackles. After a while of soaking up the pressure St. Raphael's found the breakthrough and levelled the game. With just under 5 minutes left it was going to be a tense finish. It was St. Raphael's who probably finished the strongest as we found ourselves hanging on for the point in the end. The whistle blew to end the game at 1-1 and although we were defending for our lives at the end of the game, we were left feeling disappointed not to be going home with the 3 points. Well fought draw though boys. Well done.

With St. Raphael's only having 1 pitch the girls had to wait for the boys to finish up before kicking off in their third game of the competition. With 2 wins out of 2 so far the girls confidence was high and they were looking for a third successive victory. However, the game did not start as planned at St. Raphael's took an early lead after some poor defensive errors. The early goal kicked us into life though and the girls responded brilliantly as they played some great looking football.  It didn't take long for an equaliser to come as Alessia broke through from the halfway line to run through to score a great individual goal. Shortly after, Fielding's second goal came this time with Oona scoring from an assist from Izzy. The half time whistle blew and the girls were now looking much more in control of the game. It wasn't all smooth sailing in the second half as our defence was put to the test with Alicia forced to make a number of good saves. Again about midway through the second half Fielding were on the attack again as Izzy played another great pass, this time into Serafina who calmly placed the ball into the top corner of the goal. The full time whistle blew and the girls were very happy to maintain their 100% record with another great win. Well done girls. 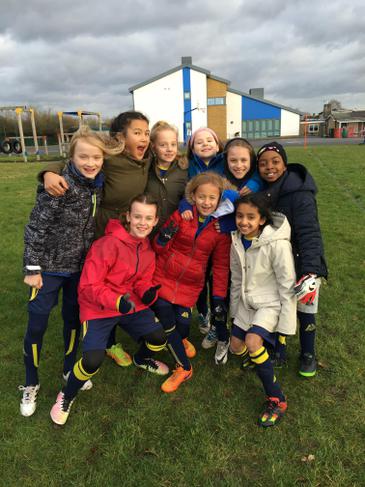 Next up for both teams in the Peal Shield is Little Ealing!