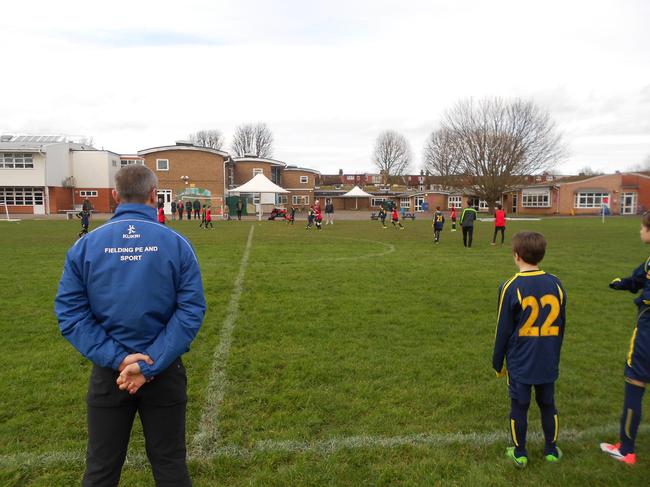 Semi-final day came today and the boy were just 40 minutes away from another final. Little Ealing have always proved tough competition for us though so it wasn't going to be easy to get there. The game kicked off and Fielding were on the attack straight away with Artie running through the Little Ealing defence and hitting a shot just wide of the post. So close to a perfect start. After that the opening exchanges were quite scrappy with both teams struggling to get the ball under control and keep possession. Fielding just about had the upper hand in the game and about half way through the first half they made it count. Luka, Artie and Sonny linked up brilliantly on the right flank which resulted in the ball being crossed in passed the goalkeeper for Artie to tap in to an open net. Great passing play from Fielding. There wasn't a huge amount of talking points after that and so the half finished at 1-0 Fielding. It is a testament to the quality of football that the boys can play that during the half time team talk, at 1-0 up in a semi final, Mr Winn was telling the boys he was expecting more from them!

The second half started and the boys responded to the team talk well with the quality of the football improving almost instantly. Fielding were also being spurred on by some great parent support at the side, as well as a whole Year 6 class and even our very proud headteacher, Mr Dunmall. Fielding were now playing for the crowd but Little Ealing also improved their game in the second half. Some great defensive work from Noah, Anu and Arun ensured that Little Ealing didn't get through. Ben was then subbed on for Arun to steady the ship and even managed to cause the Little Ealing defence some problems with some great dribbling from his own half. Part way through the second half and Fielding were displaying some very good passing again to create lots of scoring opportunities. It felt like a goal was coming and after a period of good pressure from Fielding, one came. The second goal was very similar to the first with Luka, Artie and Sonny linking up well again, this time with Artie turning provider and giving Sonny an easy goal.It was now 2-0 and Fielding were beginning to get more comfortable. Little Ealing were not ready to give up though and won the ball from Fielding in their own half and broke out with a great through ball. The Fielding defence was split and so Noah rushed off of his line to try to clear the ball. The ball was passed around him and it was Little Ealing with the tap in this time. The score was now 2-1 with a few minutes left to play. The boys woke up again and realised they weren't as comfortable as they perhaps thought. Little Ealing were now pressing for an equaliser and extra time. After what seemed a very long couple of minutes the final whistle blew and Fielding had won the game.

It proved to be another very good team performance and a well deserved place in the Peal Shield final.

Our opponents should be decided this week with St. Raphael's and St. John's playing in the other semi-final. Well done once again for another solid display boys!!