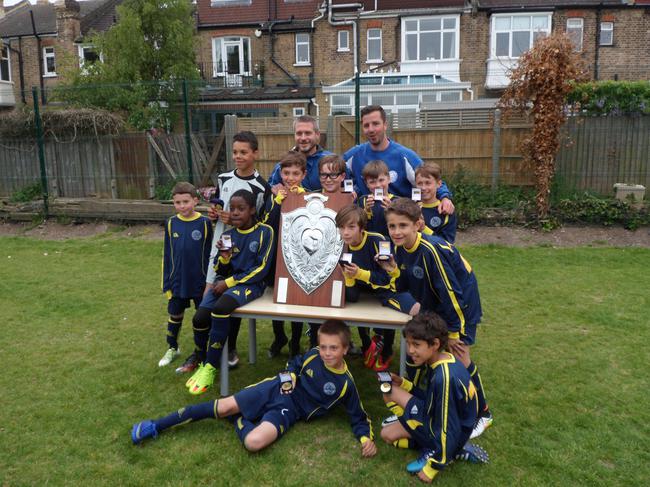 After over 2 months of waiting the Peal Shield final was finally played yesterday. Fielding and St. Raphael's have played against each other a few times this season and were very evenly matched with the last 2 games resulting in a 1-0 win for both teams. Past results mean nothing in a cup final though so the boys knew that they were in for another tough game against St. Raphs.

The team started with Noah S in goal, Ben T and Anu O at the back, Michael B in the middle with Artie O and Luka T on the wings and Sonny W up front. We also had a very strong bench with Luka V and Arun S, as well as 2 up and coming stars from Year 5 in Rory H and Joe C.

The whistle blew and it was a fairly nervy start from both teams although Fielding probably had the upper hand. After a few minutes of settling down Fielding opened the scoring with a superb individual effort from Artie who cut in from the left, taking the ball past 2 players before finishing past the keeper. Nerves were beginning to settle more and Fielding were getting the ball in to some good areas but didn't really test the keeper that much. A little further into the first half and Fielding had got themselves into another great position putting Artie on the ball again, setting him up for his second goal of the game. 2-0 Fielding and the whistle went for half time. The boys knew they had started well, it was just about maintaining the same level of performance and not becoming complacent.

The second half started and it was obvious that St. Raphael's hadn't conceded defeat just yet. After some great pressing on Noah from their striker they managed to deflect the ball into our net and cut our lead to 1. We managed to compose ourselves slightly and held the 1 goal lead for a short while. St Raphael's were still pressing though and creating chances for themselves and eventually this led to an equalizer not long before the end of the game. After a couple of nervy minutes the whistle blew for full time and so we had extra time. Two halves of 5 minutes to come.

St. Raphael's now had the momentum and although Fielding heads hadn't fully dropped yet the boys were a bit shaken and soon conceded a third time in first half extra time. The whistle blew. Half time. 5 minutes left. The boys heads were getting low but after a rousing speech from Mr Winn they lifted slightly. There was 5 minutes left to fight for the equalizer and force the game into penalties so out they went. The second half kicked off and it seemed to take no time at all before Luka T stepped up with the goal. It was 3-3 and the crowd and the players were going mad. Getting the equalizer so early in the second half gave the boys a massive boost. They didn't want penalties any more, they wanted another goal. Confidence was now high. Fielding were on the ball again and played into Artie again who scored his hat-trick and Fielding's fourth! With 3 minutes left of the game it was now all about defense. It was probably the longest 3 minutes of the teams footballing careers so far, but they held on to lift the shield. What a game! It was well deserved win for the boys though who have a had a fantastic season playing together. Well done Fielding, we've got our name on the historic Peal Shield again!!