Today was cup final day and Fielding were up against St. Vincent's for the right to lift the RSK Cup. We were expecting a tough game today as St. Vincent's were the winners of this years area finals and were the Ealing representatives at the London Youth Games. The girls knew this going into the game and so had to be on top form to get the win today. They started off really well, pressing the ball, winning possession and then keeping the ball in the St. Vincent half. The constant pressure paid off after about 10 minutes as Lily got us off to a great start with an excellent finish. We continued to pressure the St. Vincent's goal and were creating a lot of chances but without really testing the keeper. At our end Riya and Annabel were mopping up everything that was coming their way before kick starting more attacks. Towards the end of the first half the ball fell to Serafina  just outside the area who calmly placed the ball though a crowd of players into the bottom right corner of the goal to make it 2-0. In the second half, the game played out in a very similar way to the first half. Lots of Fielding possession and pressure on the St. Vincent's goal but few real tests for the keeper. About midway through the half Serafina picked up the ball around the half way line and went on a run. She took the ball past a number of St. Vincent's defenders before slotting past the keeper to make it 3-0. The whistle blew for full time and all 10 of our girls were ecstatic that they had finally won their first bit of silverware as a school team. The wait was long but it was definitely well deserved. A huge well done to Sophie, Riya, Annabel, Izzy, Oona, Serafina, Lily, Alessia, Chloe and Daisy for working so hard in this years competition, you have all been excellent! 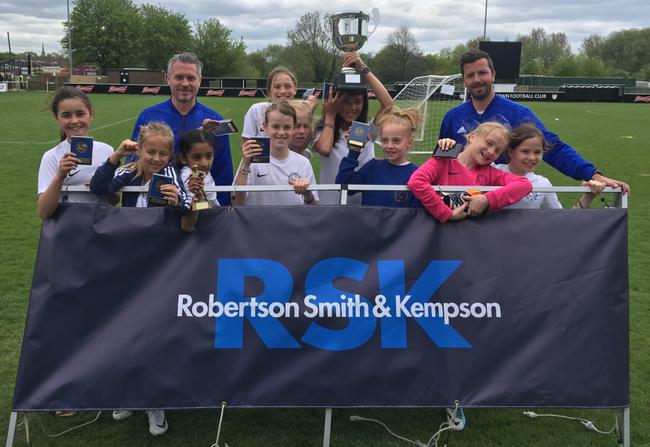