Today was the borough finals the chance to represent Ealing at the London youth games was at stake.

First up was Little Ealing who we had narrowly beaten in the final of the first competition. This time it was a much more one sided game Fielding with some great team play came out 4-0 winners. Great start St Gregories were up next and they looked strong and took the lead 1-0. Fielding showed great resilience and fought back level and then took the lead and the match finished 2-1 Fielding.

Last game was against Holy Family who gave it there all but Fielding were on fire and playing some great Hockey they agasin ran out 4-0 winners.

Unbeaten and into the London youth games to represent Ealing fantastic reward after all the extra hours the squad had put in over the last few months. Well done to everyone involved.

A Team Match Report - by Annabel, Flora and Izzy

The A team was taken into the group stages of 4 teams and had West Acton A to get past in our first match. A sigh of relief as we come out of the game with a strong start giving us a 7-0 win! The group stages carry on in a similar way with many convincing wins. Next to come up was Wolf Fields A. All feeling quite relieved as our first match went so well, we were ready for this. We won 6-0 Keeping the clean sheet. In our next game, winning 6-0 gave us a ticket to the next stage. A good start once again winning 6-0 against Allenby. With a spring in our step we leapt into to the next match giving up a good fight. We were all relieved to come out of the match the score being a narrow win of 3-2. The last match of the second stage, we had to win. Breathing heavily, we came out of the game with smiles on our faces as we knew we had just booked us a place in the semi-finals. We all knew that we had to play our best in this game against Berrymeade in the semi-finals. Playing our best we reached won goal and when the whistle went we all cheered as we had just got ourselves into the finals. In the finals against Little Ealing A, both teams were fighting hard for victory but Little Ealing put up a good attack; while Fielding were pushing against their defence! By the end of full time Toby had scored a sneaky goal but unfortunately we conceded a goal to make matters worse by going into extra time. With the perpetual tension hanging over everybody’s head the teams star player Annabel managed to score the winning goal leaving our team ecstatic. As we won the tournament we will now be moving with hope to the Area Finals and the medals hang proudly around our necks! B Team Match Report - by Johnny

On Thursday 7th February, there was a hockey tournament. For the B Team, there were two groups and the top two teams of each group proceeded to the top group in the second round; with the 3rd and 4th placed teams proceeding to a lower second round group.

Little Ealing, Three Bridges, Allenby and Fielding went into the top group, whilst St. Marks, North, and two other teams went to the lower group.

Fielding’s first match was against St. Marks. The line-up was Henry, Izzy, and Leah and me. Our manager commented that we played very well and scored some excellent goals. The overall score was 7-0 to us!!

Our second match was against Three Bridges. The line-up was Henry, Jasper, Molly and Leah. Henry scored an excellent goal but we failed to track back after they took possession. It was unlucky and we lost 4-1. Three Bridges were very good though.

The third match was our last match in the first group and was against North. The line-up was Jasper, Molly and Izzy and me. We played very well; we were always testing their defence and in this match we were tracking back. There were some excellent saves made by the defenders, Molly and Izzy. We scored some superb goals and the overall score was 5-1 to us!

The next thing that happened is the organiser of the B teams told us who had gotten through to the top group and who went to the lower group. As we played competently, we came second in our group and therefore secured our place in the top group.

Following this, the first match in the second group was against Little Ealing. The line-up was Henry, Leah and Izzy and me. There were some excellent set-pieces in that game, especially when Henry crossed it in to me and I finished and scored. Unfortunately, then Izzy got injured and she had to substitute for Molly. At that point, the opposition took possession and were very skilful with the ball. Hence, we lost 4-1.

The next match was against Three Bridges again. The line-up was Henry, Jasper, Molly and Izzy. The other team played well again. They were still going through our defence but we kept our cool and scored. Jasper scored an excellent goal but sadly they won 4-2.

Fielding’s next match was against Allenby. The line-up was Jasper, Leah, Izzy (who had recovered so she was playing) and me. We were beating them really well. Jasper scored an amazing goal from the halfway line and the score ended up as 3-1. We were really tracking back and helping the defence in this game. We were also attacking with confidence and momentum.

Then the organiser announced the winners of the second group and the winner of the 1st place and 2nd place group was the overall winner. We found the second group really challenging as the level of play had risen. Little Ealing had won, Three Bridges came second and we came third which was a good result. I think overall the B team for Fielding played really well.

We didn’t win but we demonstrated perseverance in our battle for first place. Perhaps next time we will achieve it! Today we took 2 teams to Featherstone High School for this years competition. Both teams were put into separate groups of 5 teams and set about trying to make it into the later stages of the competition. The Fielding A team won 2 and drew 2 to finish 2nd in the group and make it to the second group stage. Fielding B's unfortunately found the morning quite tough and failed to win a game and so were due to play in the plate competition in the afternoon. 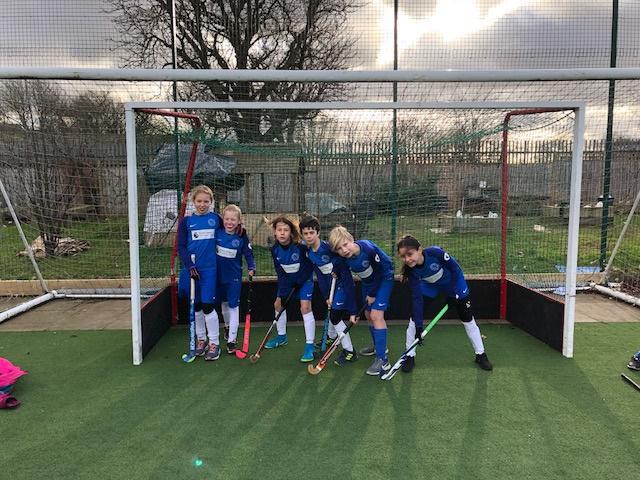 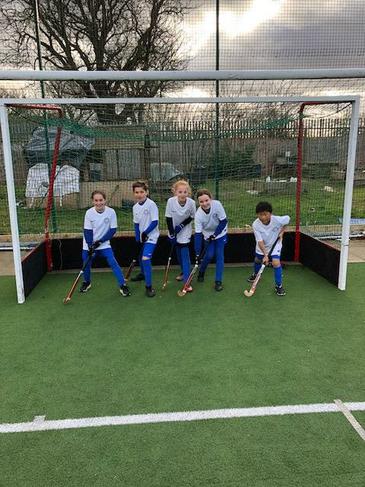 For the A team who were now 1 of 8 teams left in the competition they had to finish top of their group in order to play the winners of the other group in the final. The B team weren't playing for prizes but were playing in a group made up of the other 4th place finishers to try to get a win under their belts. The B team were excellent in the afternoon and got off to a winning start which they were able to maintain in following games. In the afternoon games, the B team did not lose a game! Great resilience and perseverance shown from the B team today which paid off  as they finished off their day on a big high! The A team won 3 and lost 1 in the afternoon which was a fantastic achievement considering it was a group of winners and runners up. Unfortunately it wasn't enough to top the group and get through to the final as the team that beat us won all 4 of their games.

Both teams were excellent today though and represented the school very well. Well done Fielding.

Fielding brought 2 teams to the Featherstone Hockey tournament today with the hope of claiming another victory. Both A and B teams were strong and we had high hopes that both teams would be in with a chance of getting through the group stages and into the semi finals.There were 20 teams entered in the tournament, split across 4 groups, with a place in the semi's the prize for each of the group winners.

The Fielding B team were drawn in a group with Three Bridges A, Khalsa B, Mount Carmel C and St. Anselm's B. Fielding B's first game was against Three Bridges A team in a game that proved to be extremely tough as our guys found themselves on the end of a 4-0 defeat. Game 2 was up against St. Anselm's and again we found it very difficult to get into our stride as we ended up losing 3-0. Game 3 was against the Mount Carmel 'C' team who ended up being the A team. After 2 defeats we were low on confidence but we did manage to finally get our first goal. However, it was little consolation as we lost 3-1. Our final game against Khalsa B was forfeit as Khalsa could not field a team. The day ended there for a B team with a very disappointing bottom of the group finish. 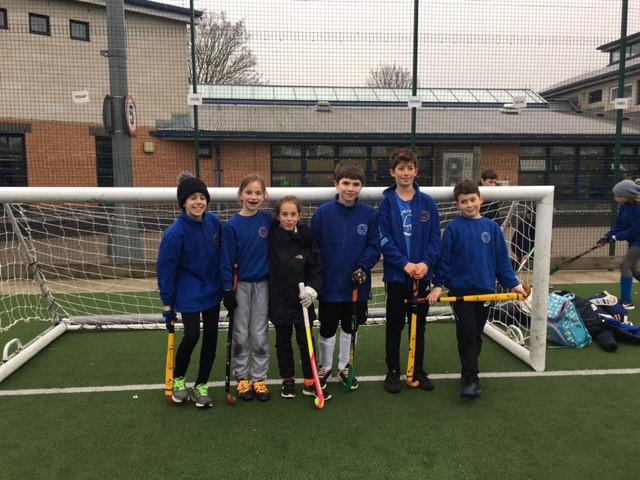 The Fielding A team were drawn in Group 4 with Berrymede B, Hambrough A, East Acton and Little Ealing. The A team's first game was against Berrymede B in a game which was the complete opposite to our B team as they went on to win 7-1. They went into their second game against Little Ealing with bags of confidence to produce another very good performance with a 5-2 victory. Third up for Fielding A was Hambrough A. Again our guys played some excellent hockey and controlled the game well as they won 4-0. Our final game against East Acton was by far our toughest test so far, with the guys having to work their absolute hardest to grind out a 2-0 win. So after 4 games the A team finished top of the group having won every game to set up a semi final match up with Three Bridges A. 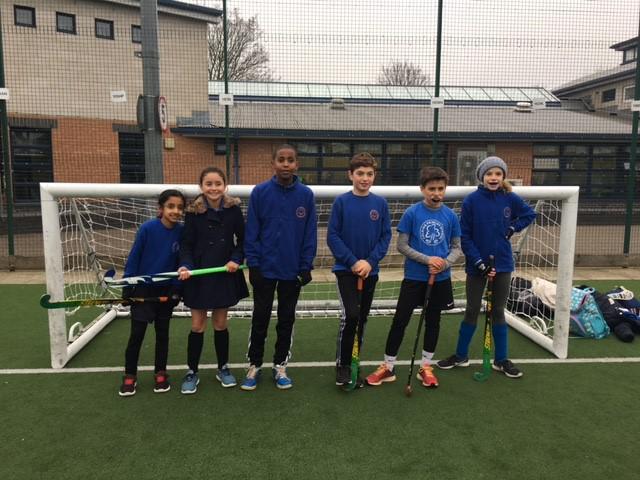 We knew a bit about Three Bridges A as they beat our B team in the group stage so we went into the game expecting a battle. We were right with our expectations as we finally found ourselves on the end of a defeat as they scored 3 past us as we only scored 1. The loss put us into the 3rd/4th playoff game against Three Bridges B. This was another very hard game which was tight all the way through. When the final whistle blew the score was locked at 1-1 and so moved into golden goal extra time. The whistle blew and 20 seconds must have passed before we had the ball in the Three Bridges goal to claim third place with a 2-1 win. So as they day drew to a close, we headed back to school fairly satisfied as 1 of our teams were wearing bronze medals around the necks.